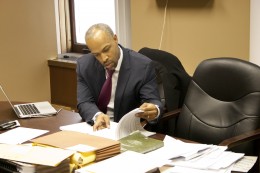 Perkins is an attorney with the Perkins Law Group in downtown Detroit, headed by his brother Todd Perkins. Sean has handled felony and misdemeanor criminal cases and personal injury, no-fault and bankruptcy cases.

He is also a benefits representative for UAW Local 387 at the Woodhaven Stamping plant. where he was an assembly line worker, hi-lo driver, journeyman and pipefitter before law school. He's a graduate of Wayne State University and Thomas M. Cooley Law School.

"To be able to serve the citizens of this great city, my hometown, the city that I have loved since birth, is a euphoric moment. This is a God-sent moment," Perkins said in a statement.

Sherman has been chief magistrate judge in 36th District Court. Before coming to the court, she was a sole practitioner attorney.

"In 2006, I joined the 36th District Court as a magistrate, and now, almost 15 years to the date, I get to serve the citizens of Detroit in this new capacity," she said in a statement.